Recently, Microsoft launched this new website, which allows us helping to improve Microsoft Dynamics 365 and its family of products and solutions by discussing ideas, providing suggestions and giving feedback.

This site offers a great opportunity for all Dynamics community members to make their ideas and suggestions heard and/or to vote for features that have already been suggested by others.

The ideas and suggestions that get the most votes are likely to be built into future versions of the Dynamics 365 product family. Even though there is no guarantee that one’s idea will be realized, there is absolutely no chance that it will be considered if you do not make yourself heard and use this platform.

That’s why I would like to ask you to make use of the newly released site, not only to bring your own ideas forward but also to vote for other already existing ideas in order to make the Dynamics 365 product family even better in the future.

Do you have other or better ideas?
Then share them on https://ideas.dynamics.com/ideas/ or vote and comment on already existing ones, such as the ones I listed above.

Many thanks for your support and helping making the Dynamics 365 product family better.

As the other remaining production related standard cost variances are treated in a similar way as the previously analyzed lot size variance, they are analyzed together in this post. In order to get a price, quantity and substitution variance posted, the following modifications have been made to the standard production process for the item that has already been used in the prior post.

Other common sources of standard cost variances are described on the following website: https://technet.microsoft.com/en-us/library/gg213654.aspx

The next screen print illustrates the total production costs of $1640 and the different standard cost variances for the sample production order processed.

As before, the next accounting overview summarizes the generated ledger transactions.

The financial statement overview presented above shows that the total inventory balance of the produced item ($1000) is too low from an actual costing perspective ($1640). For that reason, an allocation of the price, quantity and substitution variance similar to what has been shown in the previous post for the lot size variance is required.

Applied to the example shown above, the complete price, quantity and substitution variance amounts would have to be shifted to the company’s balance sheet by making use of an allocation rule. That is because only a single receipt transaction but not issue transaction has been recorded thus far. If also issue transactions would have been recorded, a separation and allocation of the different variance amounts would be required. The setup and application of this allocation rule is not shown here to conserve space and because it follows the same concept that has been explained in the prior posts.

Summary:
This and the previous posts demonstrated that companies that make use of a standard cost inventory valuation can obtain a parallel inventory value that is based on actual costs by applying general ledger allocation rules for the different standard cost variances.

The next graph summarizes the different standard cost variances and illustrates how they need to be treated to arrive at a parallel inventory value.

The graph above differentiates between the different standard cost variances based on whether they arise internally (cost revaluation and cost change variance) or whether they have an external market relationship.

As explained before, the ‘internal’ standard cost variances need to be eliminated, that is, shifted from the company’s income statement to its balance sheet because they relate to receipt transactions only and are eliminated automatically once the items are sold/consumed later on.

The ‘external’ standard cost variances require on the other hand side a separation based on whether they relate to receipt or issue transactions. This separation can be realized by making use of the ledger allocation rules and ensures that an actual cost inventory value can be obtained.

Within this fourth part we will have a look at the lot size variance (LSV) first, which arises for example if the good quantity from a production order differs from the calculation quantity that was used for the standard cost calculation of an item. The following graphic illustrates the composition of the finished item that will be used for the subsequent explanations of the production lot size variance.

The graphic above shows a finished good that is made of a raw material that has a standard cost price of $500 setup. In addition, another $500 route related costs – that consist of $490 assembly cost and $10 setup cost – are necessary to produce the item.

As the setup costs are independent from the quantity produced, the total production costs of an item decrease, as the production quantity increases. The next graphic illustrates this relationship for the sample item used.

To illustrate how the lot size variance arises and how to deal with this kind of variance, a production order for 10 pcs of the finished good is processed. The next screen print shows that a total of $9910 production costs arise for the production of the 10 items [$10 setup costs + 10 x ($500 material costs + $490 assembly costs)]. The illustrated lot size variance of $90 results from the fix cost degression effect shown in the previous graphic. 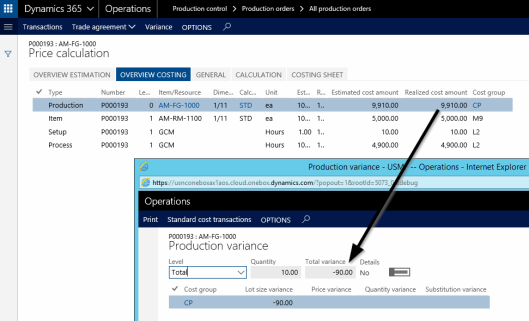 Similar to what has been shown in the previous post, the next accounting-like overview summarizes the production postings recorded (separated by the different production steps).

Further above, a realized cost amount of $9910 has been identified. Against the background of this actual cost amount, it can be concluded that the inventory value of the finished goods is overstated by $90 from an actual costing perspective.

If one of the produced items is sold later on, the inventory value is decreased by $1000 – the standard costs of the item. The financial statements illustrated below exemplifies this situation.

From an actual costing perspective, the decrease in the inventory value from the sale of the produced item is comparatively too high. The same holds for the cost of sales, which are recorded on ledger account 640650.

In order to arrive at an actual cost valuation, the lot size variance (LSV) needs consequently be adjusted and split up in a similar way that has been shown for the purchase price variance before. The next graphic exemplifies the necessary separation of the total lot size variance if one out of the ten produced items is sold. 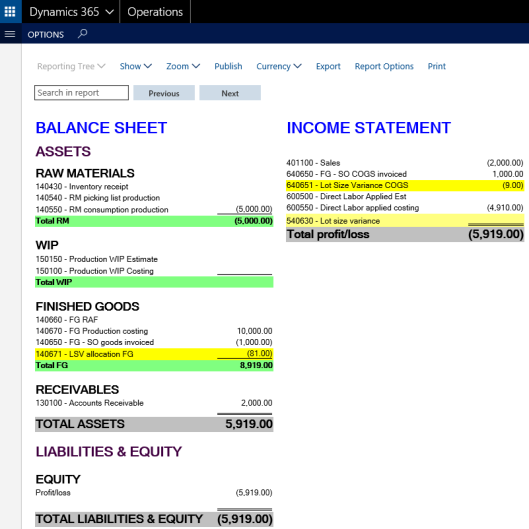 The financial statement overview shows a total inventory value that is $81 lower than before. This reduction takes care of the difference between the actual and the standard cost price [9 pcs x ($1000 – $991)]. As the allocated lot size variance amount is recorded on a separate ledger account, a parallel standard cost and actual cost inventory valuation can be achieved.

Please note that this also applies for the COGS amount of $1000 that has been adjusted through a corresponding adjustment on ledger account 640651 to arrive at an actual cost value of $991.

Within the next post we will take a look at the other production related standard cost variances and how to deal with them from a parallel valuation perspective. Till then.