Within this second part of the series on vendor invoice recording, we start with a process where a marketing employee (Nicole Holiday) orders some marketing materials via Email.

After the materials have been received by Nicole Holiday, the vendor invoice arrives and is manually entered in the pending vendor invoice form. After recording all invoice related data, the AP clerk initiates the invoice workflow.

Within the first workflow step, the one who ordered the materials (Nicole Holiday) needs to review the invoice and confirm that all ordered materials arrived in good condition.

Thereafter, the cost center manager (Benjamin Martin) needs to approve the expense amount before it can be posted and paid later on.

The next flowchart summarizes the different process steps that will be investigated in more detail from a Dynamics AX/365 for Operations perspective.

The following organizational chart highlights the employees/positions involved in the process in light brown color. Note that this chart will also be used for the subsequent posts on vendor invoice recording. 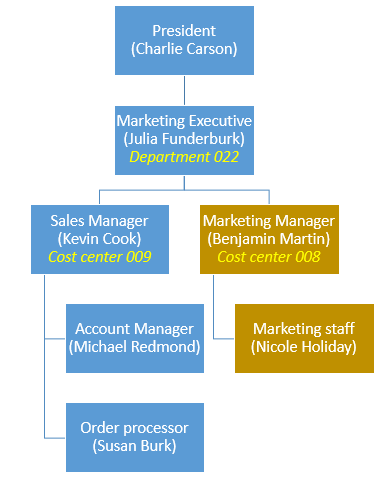 Based on findings that have been made by other Dynamics AX/365 for Operations experts – please see the following post / video – the invoice approval workflow has been set up in a way that makes use of two different expenditure reviewer groups.

The person responsible for approving the invoice is consequently the one that is setup as the owner of the respective cost center. In the example illustrated, this is Benjamin Martin as the head of cost center 008.

It is the financial dimension owner and not the manager of the corresponding operating unit that is referenced through the expenditure reviewer group.

The way how the setup is made requires that the expense invoice is entered with the financial dimension worker, which defines the orderer who is responsible for verifying that the ordered materials arrived. In addition, the respective cost center needs to be entered because it determines the manager that is responsible for approving the invoice.

After describing the elements required for the invoice workflow, let’s have a look at the different workflow steps and the overall setup of the sample workflow used in this post, which is illustrated below.

The following two screen prints show the setup of the first workflow step (review invoice) that requires Nicole Holiday reviewing whether all materials have been delivered by the vendor. Please note that Nicole holiday is not directly addressed in the first workflow step but rather the workflow participant ‘orderer’. As the expenditure reviewer group ‘orderer’ links to the financial dimension ‘worker’, the person who ordered the materials needs consequently be entered in the financial dimension worker field at the time the invoice is entered. This will be shown further below.

The second workflow step – the invoice approval step – is also assigned to a workflow participant. This time, the approver, as illustrated in the next screen prints. 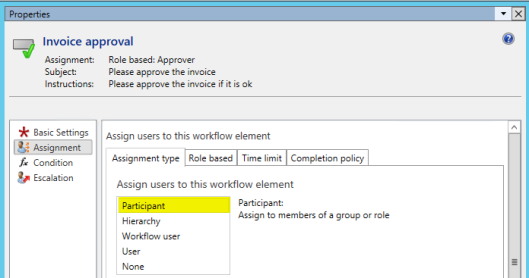 With this setup in place, let’s record the expense invoice for the marketing materials. The next illustration shows the vendor invoice recording, which makes use of the ‘advertising’ procurement category that defines the ledger account that will be used for posting the invoice. 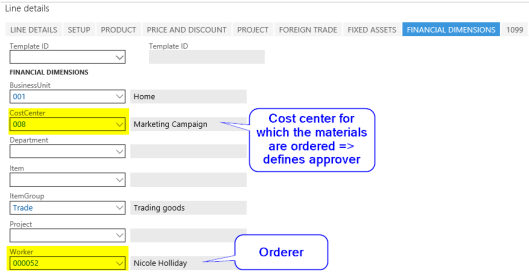 After all invoice details are entered, the workflow process is started by the accountant Phyllis Harris. Based on the workflow setup, Nicole Holiday is the first one that gets a workflow item-task assigned. Please see the next screen print.

If Nicole opens the assigned work item, she can inspect the invoice recorded by the AP clerk. Provided that everything is ok, she can then complete her review task.

Once Nicole has completed her review task, the workflow assigns another work-item to Benjamin who has to approve the amount to be spend.

Benjamin can similarly choose among different workflow actions, such as approve, reject, etc.

In addition to approving the invoice Benjamin Martin has the option to reject the invoice, which returns it to the AP clerk – the workflow originator – who can then decide how to proceed. Delegating the approval step assigns the invoice approval to another user. The same applies to the request change workflow action, which allows specifying a user that has to make some changes – for example to the sales tax – before the invoice workflow can continue.

Once Benjamin Martin approved the expense invoice, all workflow steps are completed …

… and the invoice becomes available for posting.

Provided that all invoice details have already been entered in the first place and against the background that the invoice has been reviewed and approved by two different people, it can be posted automatically from the author’s perspective, which can be realized by including an automatic posting step in the workflow. The next screen print illustrates this.

Posting the vendor invoice ends this second post on vendor invoice recording. The next posts will successively extend the sample invoice workflow process illustrated here. Till then.